Should be something about IT

How to get Netflix streaming on Ubuntu 12.10

Takeaway: It’s taken quite some time, but Netflix streaming video has finally arrived on the Ubuntu Linux desktop. In this easy, step-by-step, Jack Wallen shows you how.

In one of my recent blog posts, I mentioned that Netflix streaming was now available for the Ubuntu 12.10 desktop. I’ve used it — it works like a champ. Any title in your Netflix library will play and play as expected. This means, for Linux users, no more having to depend upon streaming devices or watching Netflix on your WII or PS3. Now you too can enjoy Netflix as was promised long ago by the company itself.This Netflix app is due to the hard work of programmer extraordinaire, Erich Hoover. With the help of WINE, Firefox, and Silverlight, Hoover was able to make this happen. Obviously, FOSS purists will turn their nose up at two things:

But, if you want streaming Netflix on your Linux desktop… you’ve no choice. When it comes to Hollywood, DRM is not going anywhere… ever.

The installation of Netflix on Ubuntu isn’t hard. In fact, it’s quite easy. It does, however, take some time.

Now that your machine is fully prepped, it’s time to install the Netflix Desktop app. Here are the steps:

At this point you will see quite a large number of dependencies necessary for the installation (129 to be exact). Say OK to this and the installation will begin. Depending upon the speed of your network connection, this could take some time. Once that’s done, do the following:

At this point the Netflix Desktop application will open in full screen mode. To get out of that mode, hit F11. You will also find a new Firefox icon on your desktop. You can delete that if you like.

That’s it. You are now ready to enjoy streaming Netflix on your Ubuntu Linux desktop.

Ubuntu 12.04 comes with shiny graphical tool to setup system wide global proxy. But as seen in the picture below there is no way to add exception or ignored host. 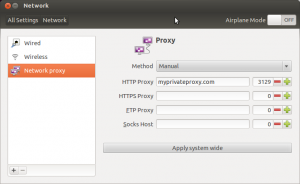 To overcome this limitation we have to install dconf Editor. You can install by clicking the previous link or by typing sudo apt-get install dconf-tools in terminal. Please note that though the software is call dconf editor its packaged as dconf-tools.

Once installed open dconf editor and navigate to system -> proxy. From here you can add ignore-hosts as string and as seen in the picture below. 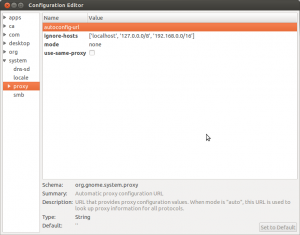 You may need to log out and log in for the changes to take effect… just to avoid any noise!

Theme by Anders Norén — Up ↑